After conquering PC, XBLA, PS3 and iOS, the cult classic shoot-em-up has finally arrived to Android! Fusing frantic, innovative gameplay from Digital Reality with stunning graphical design from Grasshopper Manufacture, Sine Mora set a new high standard for shmups and gained widespread acclaim. Strap yourself in and get ready for a breathtaking adventure!

Sine Mora is a horizontal shoot’em up that provides a unique take on challenge, where time is the ultimate factor. Mixing classic shooter sensibilities with contemporary presentation, Sine Mora is a gorgeous shoot’em up that offers a Story Mode that weaves an over-the-top tale and an Arcade Mode that provides deep, satisfying gameplay to challenge fans of the genre. With many ways to manipulate time, Sine Mora features over 50 weapon combinations to complete each beautiful stage that form fits to the player’s skills with scaling difficulty. Soundtrack composed by Akira Yamaoka and featuring boss designs by Mahiro Maeda. 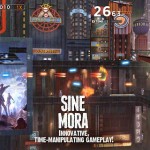